Colonel Silbert began his career as a patrol officer in South Phoenix at the South Mountain Precinct. After working in a patrol capacity he was transferred to work on a proactive enforcement squad that conducted gang and drug investigations. During this assignment, Colonel Silbert also worked in an undercover capacity.

Colonel Silbert continued his career working street gangs, but also mentoring at risk youth in the Foothills Housing Projects of South Phoenix, where he was a PAL officer. After this assignment, he continued to investigate street gangs as a detective on the Night Gang Enforcement Unit in the Organized Crime Bureau. Colonel Silbert was also a member of the FBI Violent Street Gang Task Force where he and members of the unit conducted wire-tap and conspiracy investigations.

After his assignment in the Gang Unit and the FBI Violent Street Gang Task Force, he was selected to be a member of the Special Assignments Unit (SAU/SWAT). After several years with SAU, Colonel Silbert was promoted to sergeant where he worked at both the Squaw Peak Precinct and again in South Phoenix at the South Mountain Precinct. During these years he was selected as Supervisor of the Year and Police Officer of the Year. After his assignment as a Field Training Sergeant in South Phoenix, he was promoted to lieutenant.

As a lieutenant he served in Patrol, Systems Integration, the Vehicular Crimes Unit, the Special Assignments Unit, the Police Academy, and as Unit Commander of the Major Offender Bureau’s Fugitive Apprehension Unit and Career Criminal Squad. Colonel Silbert holds a Bachelor’s Degree in Education. He also holds a Masters Degree in Public Administration from Arizona State University. He is a graduate of the Northwestern University School of Police Staff and Command, the FBI National Academy and is also a graduate of the Police Executive Leadership Institute.

In March 2020, Director Heston Silbert selected Lieutenant Colonel Ken Hunter to serve as the Deputy Director of the Arizona Department of Public Safety (AZ DPS). Prior to this appointment, Lt. Colonel Hunter was serving in the appointed position of Assistant Director of the Department’s Criminal Investigations Division, commanding the Intelligence, Investigations, Gang Enforcement and Border Strike Force Bureaus. Lt. Colonel Hunter also previously held the appointed position of Assistant Director of the Agency Support Division, directing the Logistics and Management Services Bureaus, as well as the Human Resources Section. These bureaus exist to support the mission critical units of AZ DPS such as Recruiting, Training, Finance, Public Records, Fleet, Aviation, and Peer Support, to name just a few.

Lt. Colonel Hunter began his career as a trooper with the AZ DPS in September of 1989 and was assigned to the Highway Patrol Division in Winslow, Arizona. As a trooper he completed assignments in motors, commercial vehicle enforcement and as a detective assigned to gang enforcement.

Lt. Colonel Hunter promoted to sergeant and was assigned to the Criminal Investigations Division. He supervised a gang enforcement squad in southern Arizona responsible for documenting and investigating criminal street gangs and transnational criminal organizations. Additionally, he held supervisory assignments at the Arizona Law Enforcement Training Academy and the Internal Affairs Unit.

After promoting to captain, he was assigned to the Arizona High Intensity Drug Trafficking Area where he facilitated, supported and enhanced collaborative drug control efforts among law enforcement agencies. He also held command assignments in the Southern Gang Enforcement District, the Southern Commercial Vehicle District, and Canine District.

Lt. Colonel Hunter holds a bachelor’s degree in Public Safety Administration from Grand Canyon University. He is a graduate of the Police Executive Research Forum Senior Management Institute for Police, Northwestern University School of Police Staff and Command and the Leadership in Police Organizations Command program. 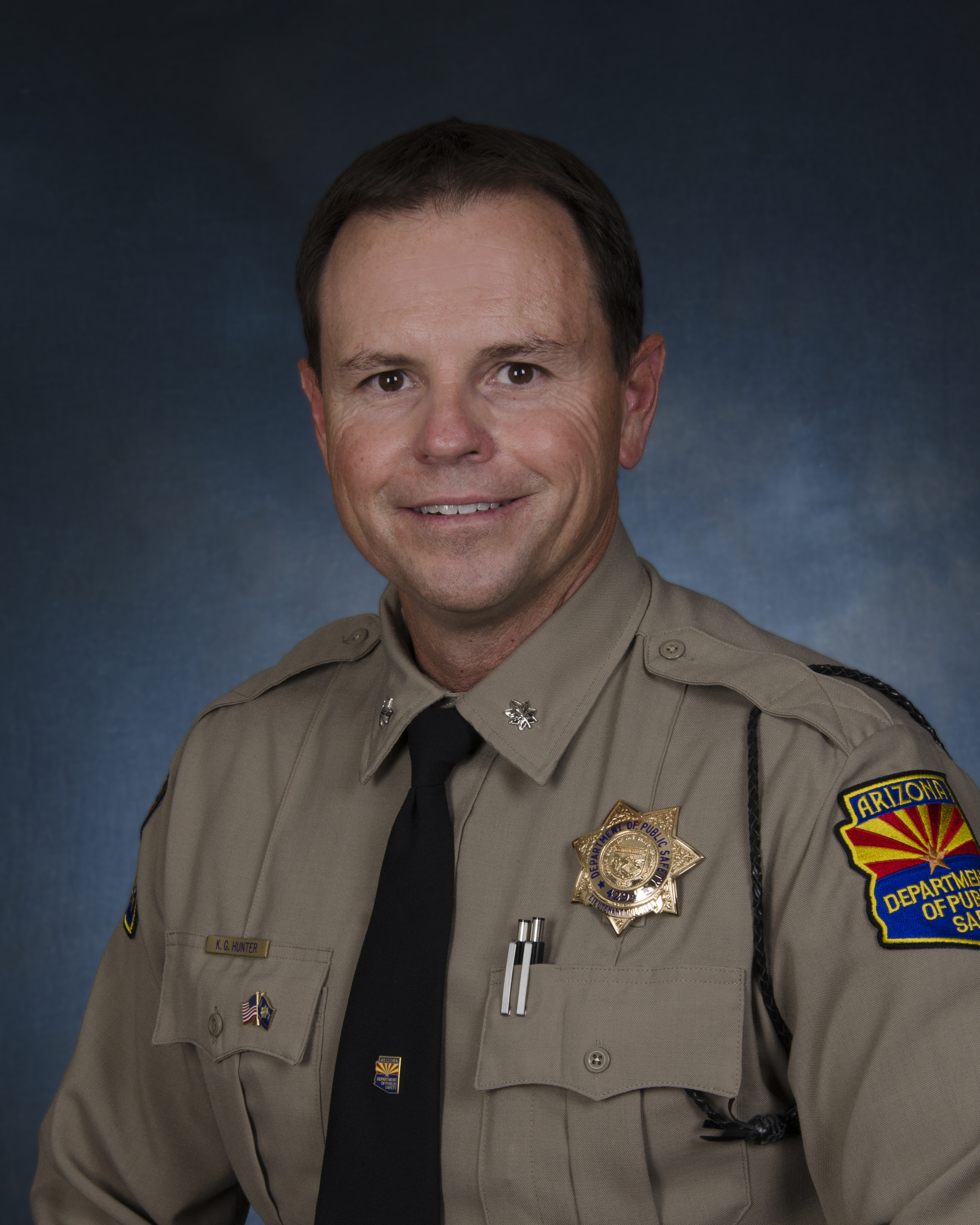 During his thirty-one years as an Arizona State Trooper, he has held a variety of positions in the Highway Patrol Division and the Criminal Investigations Division throughout the state. Lt. Colonel Lugo has spent approximately twenty-two-years of his career in the Criminal Investigations Division serving in several multi-agency task forces. Prior to his promotion, he served as the Investigations Bureau Commander over statewide Narcotics Enforcement, Auto Theft Task Force, SWAT, and Homicide Investigations (Major Crimes Unit) at the rank of major. Lt. Colonel Lugo served for approximately three years as the full-time SWAT Commander and has approximately 17 years of total SWAT experience as a SWAT Operator, Assistant Team Leader, Team Leader and Commander.

He served three years as the Highway Patrol District Commander in Tucson and approximately one and one-half years as the State Gang Task Force Border District Commander, both at the rank of captain. Lt. Colonel Lugo was assigned to the State Gang Task Force on four separate occasions throughout his career and one year as a Border Intelligence Commander, at the rank of lieutenant. As a sergeant, he served a three-year assignment at the Arizona Counter Terrorism Information Center (ACTIC), which is a multi-agency intelligence fusion center.

Lt. Colonel Lugo attended the Arizona Law Enforcement Training Academy, the Pima County Corrections Officer Basic Academy, and honorably served four years in the United States Marine Corps with assignments in Japan, South Korea, and California. He is a graduate of the Northwestern University School of Police Staff and Command and the West Point Leadership in Police Organizations (LPO) Command program. In March of 2016, he graduated from the FBI National Academy Session #263 in Quantico, Virginia. Lt. Colonel Lugo has a Bachelor of Science Degree in Organizational Leadership. 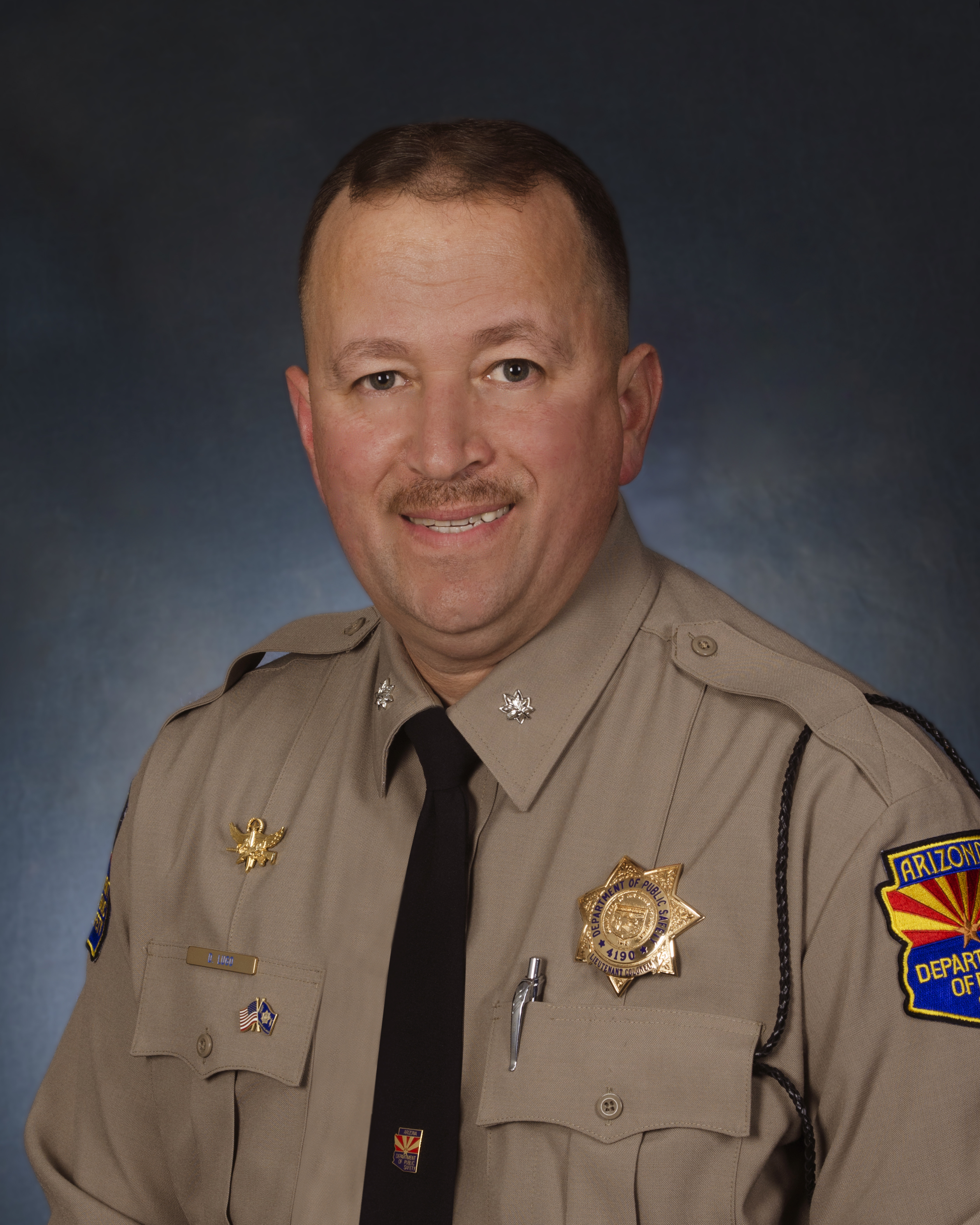 Lt. Colonel Mitchell began her career as an officer trainee in July of 1993. She attended the Phoenix Regional Police Academy and became a trooper in May of 1995. Her first assignment was to the Highway Patrol in District Six, Casa Grande. During this assignment she served as a field training officer, general instructor, phlebotomist, reserve coordinator, and she also coordinated the first Citizen Academy in District Six.

She promoted to captain in March of 2006; she was assigned to the Management Services Bureau where she was responsible for the Research and Planning Section, the Safety and Loss Unit, and the Public Records Section. She also held command assignments in the Highway Patrol Metro East District, Southern Gang Enforcement District, and the Canine District.

Lt. Colonel Mitchell was recognized in 2011 as the Criminal Investigations Division Commander of the Year and was the recipient of the Director’s Unit Citation for her role in the development of the Advanced Criminal Interdiction Training Program.

Lt. Colonel Mitchell promoted to the rank of major in May of 2015 and has served as the chief of staff for the Criminal Investigations Division, as well as the Agency Support Division. As chief of staff, she was involved with the implementation of major technological improvements in both divisions, with a strong focus on performance management, efficiency, and employee and leadership development.

Lt. Colonel Mitchell holds a bachelor’s degree in business from Arizona State University. She is a graduate of the Police Executive Research Forum Senior Management Institute for Police, Northwestern University School of Police Staff and Command and the Leadership in Police Organizations Command program. 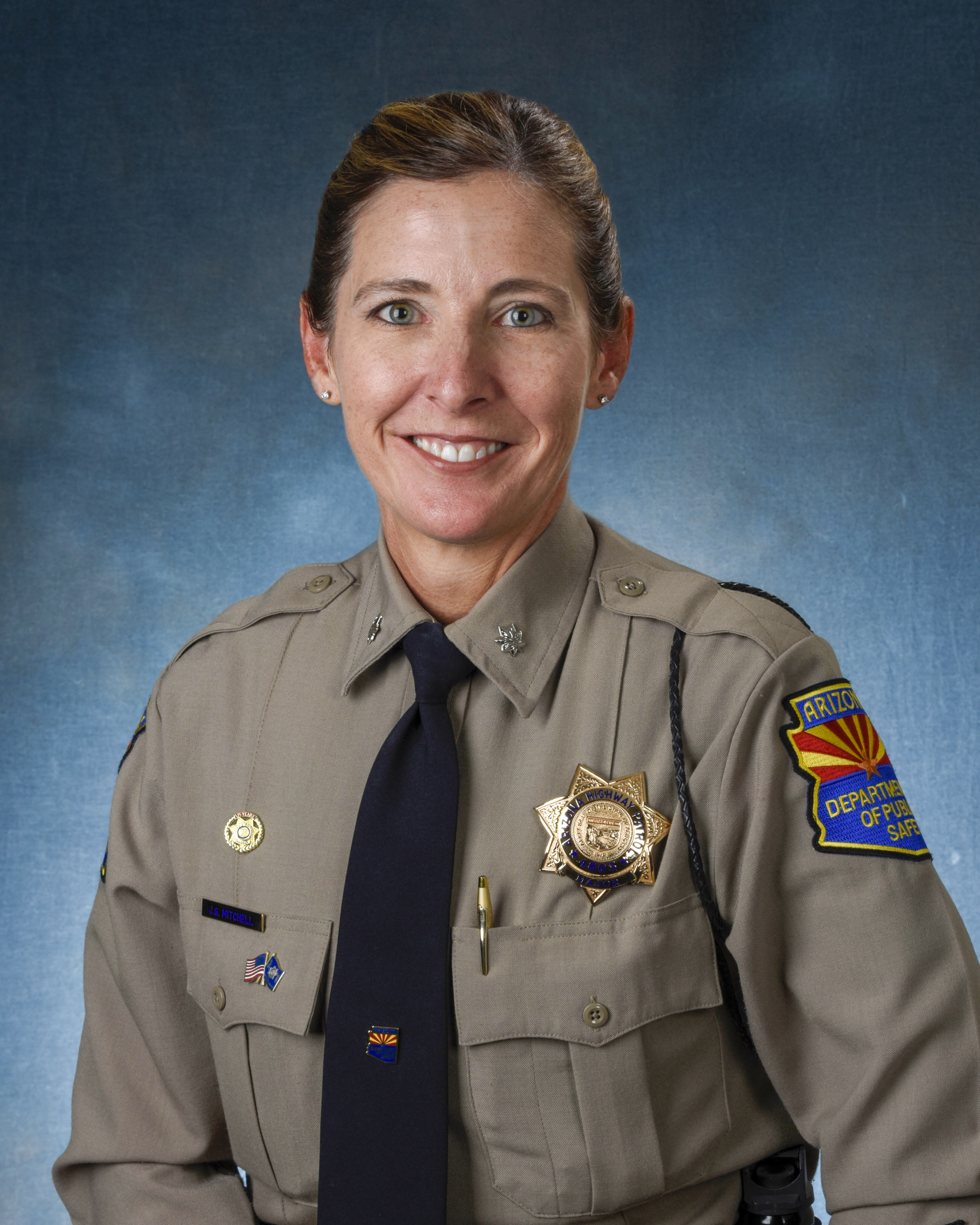 Lt. Colonel Chung began his law enforcement career at the La Paz County Sheriff’s Office in Parker, Arizona, in June 1986, where he held the positions of jailer, dispatcher, patrol deputy, investigator, and sergeant.

In 1998, he was promoted to the rank of Sergeant and was assigned to the Highway Patrol Division’s District Eight, in Nogales, Arizona, until he transferred back to Phoenix to oversee the Special Investigations Unit in 2000. In 2002, Lt. Colonel Chung was promoted to the rank of Lieutenant and led the Major Crimes Investigation District. He transferred to an administrative staff position in the Criminal Justice Support Division, currently the Technical Services Division, in 2005. In 2007, he was responsible for forming the Immigration Enforcement District and led the multi-agency Illegal Immigration Prevention and Apprehension Co-op Teams (IIMPACT) and Arizona Fraudulent Identification Task Force.

In 2008, Lt. Colonel Chung was promoted to the rank of Major overseeing the Gang Enforcement Bureau which comprised the statewide multi-agency Gang and Immigration Intelligence Team Enforcement Mission (GIITEM). He served as Chief of Staff/Executive Officer for the Technical Services Division from 2009 to 2011. From 2011 until his promotion to Lt. Colonel, he worked within the Director’s Office overseeing the Management Services Bureau.

Lt. Colonel Chung has had many accomplishments, received numerous awards, and served on numerous work groups at the Department. He earned his Certified Public Manager national certification from Arizona State University and is a graduate of Northwestern University’s School of Police Staff and Command, the International Association of Chiefs of Police Leadership in Police Organizations, and the Harvard Kennedy School’s Senior Executives in State and Local Government. He holds an Associate in Applied Science Degree in Law Enforcement Technology, a Bachelor of Science Degree in Occupational Education, majoring in Human Services, and a Masters Degree in Public Administration, specializing in Government Administration. 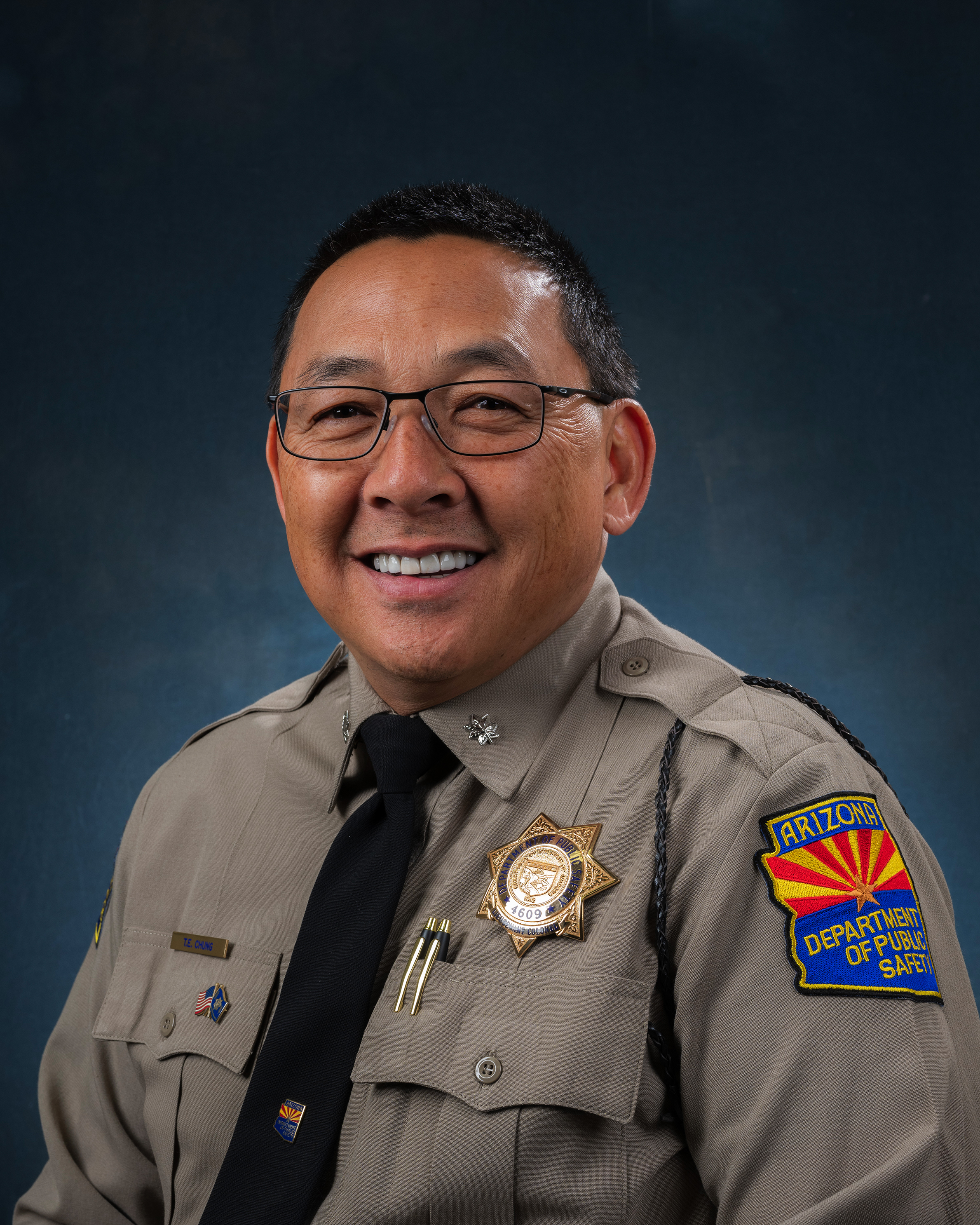 Lt. Colonel Deston Coleman Jr. was promoted and appointed as the Assistant Director of the Criminal Investigations Division on March 21, 2020.

In 1991, Lt. Colonel Coleman began his career with the Arizona Department of Public Safety as a cadet officer. After graduation, he worked in the Highway Patrol Division as a state trooper in Bullhead City. As a trooper, he completed assignments in Gila Bend and Metro Phoenix Patrol, the Vehicular Crimes Unit, and the State Gang Task Force.

Lt. Colonel Coleman promoted to sergeant and was assigned to the Criminal Investigations Division. He supervised the Vehicular Crimes Unit and was responsible for the investigation and prosecution of vehicular homicides throughout the State of Arizona. Additionally, he held supervisory assignments in the Special Investigations Unit and Internal Affairs.

After promoting to captain, Lt. Colonel Coleman was assigned to Metro Phoenix Patrol, Shift Three. He also held command assignments in the Commercial Vehicle Enforcement Bureau and Internal Affairs. Lt. Colonel Coleman took command of the Gang Enforcement Bureau when he promoted to major, then served as the commander for the Metro Phoenix Patrol Bureau, prior to his appointment as the Chief of Staff of the Highway Patrol Division. 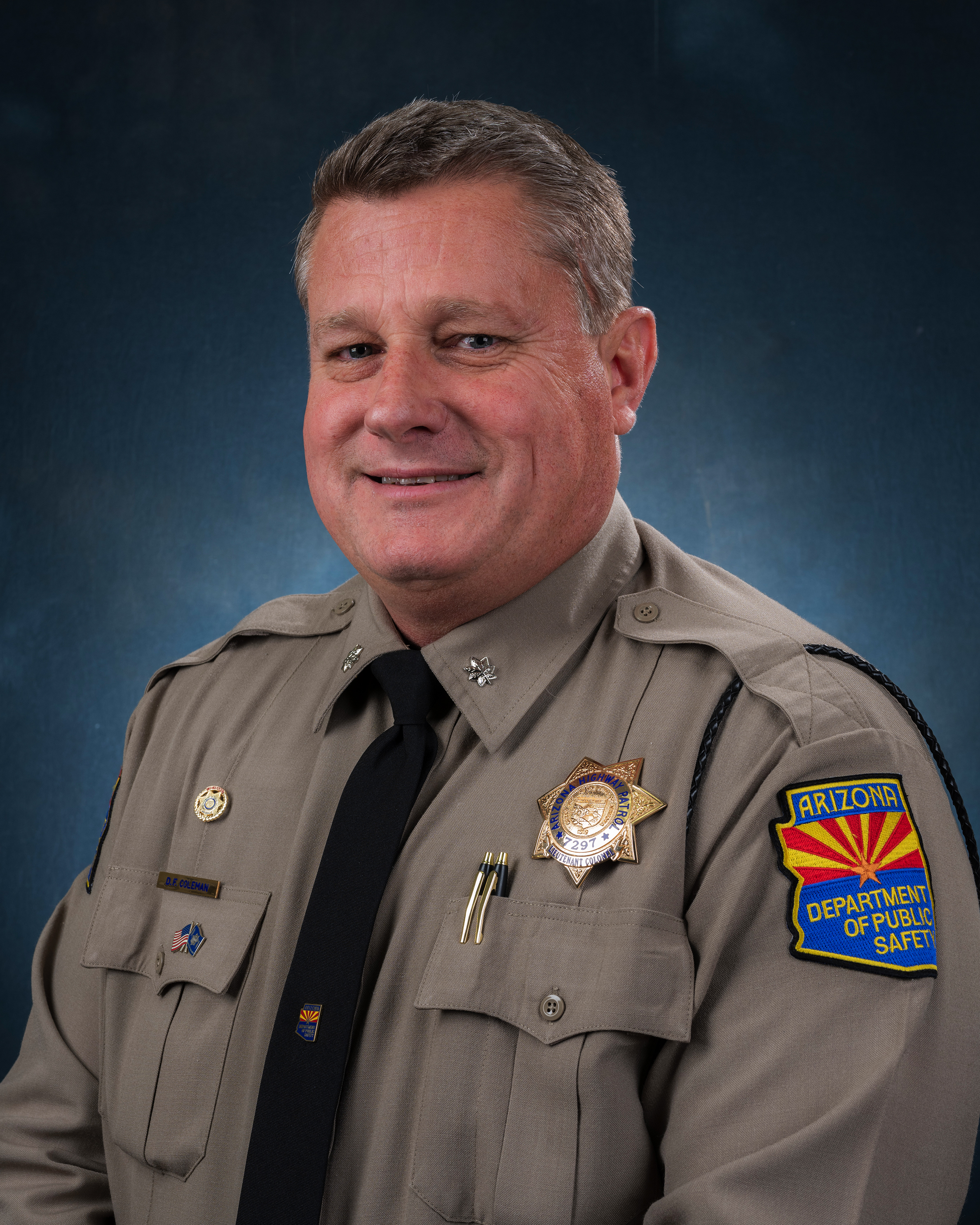 Office of the Director

Inspector Andres Vasquez is the current Executive Officer for the Arizona Department of Public Safety (the Department). He previously served with the Department from 1980-2016, retiring as a Lieutenant Colonel (Assistant Director) after 35 years of service. Upon retirement, Lt. Col. Vasquez was appointed by Governor Ducey to serve on the Council for Judicial Appointments and the Law Enforcement Merit System Council, both of which required Senate confirmation. Lt. Col. Vasquez returned to the Department in 2018 as the Equal Employment Office Manager before his appointment to his current, sworn position as Inspector II.

In addition to serving as an Assistant Director and the Chief of Staff for the Criminal Investigations Division, he has served as a commander for SWAT, Metro Gangs, and Southern Arizona Narcotics.

Inspector Vasquez has participated in over 1,000 high risk entries/operations as the SWAT commander and team member. He was the SWAT commander for the Lewis Prison hostage standoff, the longest prison hostage standoff in the U.S. He spent eleven years working undercover, including time spent as a member of the FBI Violent Street Crime Task Force. He served on the Governors Security Detail for four years, and has worked as a SWAT team member, as well as assignments in Gangs, Narcotics, Investigations, Liquor, Motors, Fatal Team Investigator, Patrol, and Recruiting.

Prior to working for the Department, Inspector Vasquez was a police officer with the Avondale Police Department and served four years in the United States Air Force. 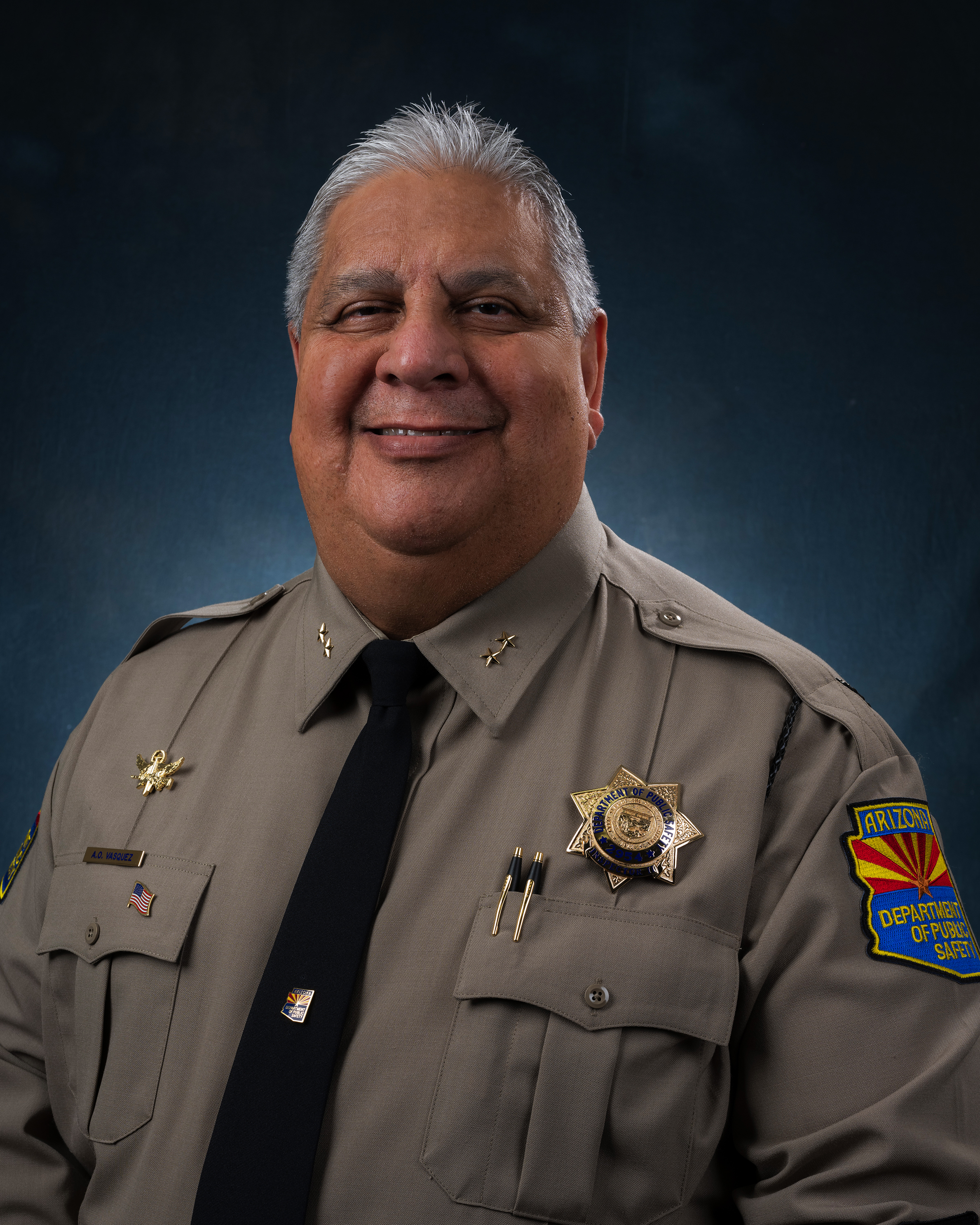