Captain Jamie Clark is assigned to the Highway Patrol Division as the District Commander in Kingman, Arizona. Captain Clark began his career with AZDPS in February of 2002, and has held positions in the Highway Patrol and the Criminal Investigations Division. He began as a trooper in Kingman, Arizona where he worked for four years prior to being selected as a detective in the Criminal Investigations Division where he served for ten years. 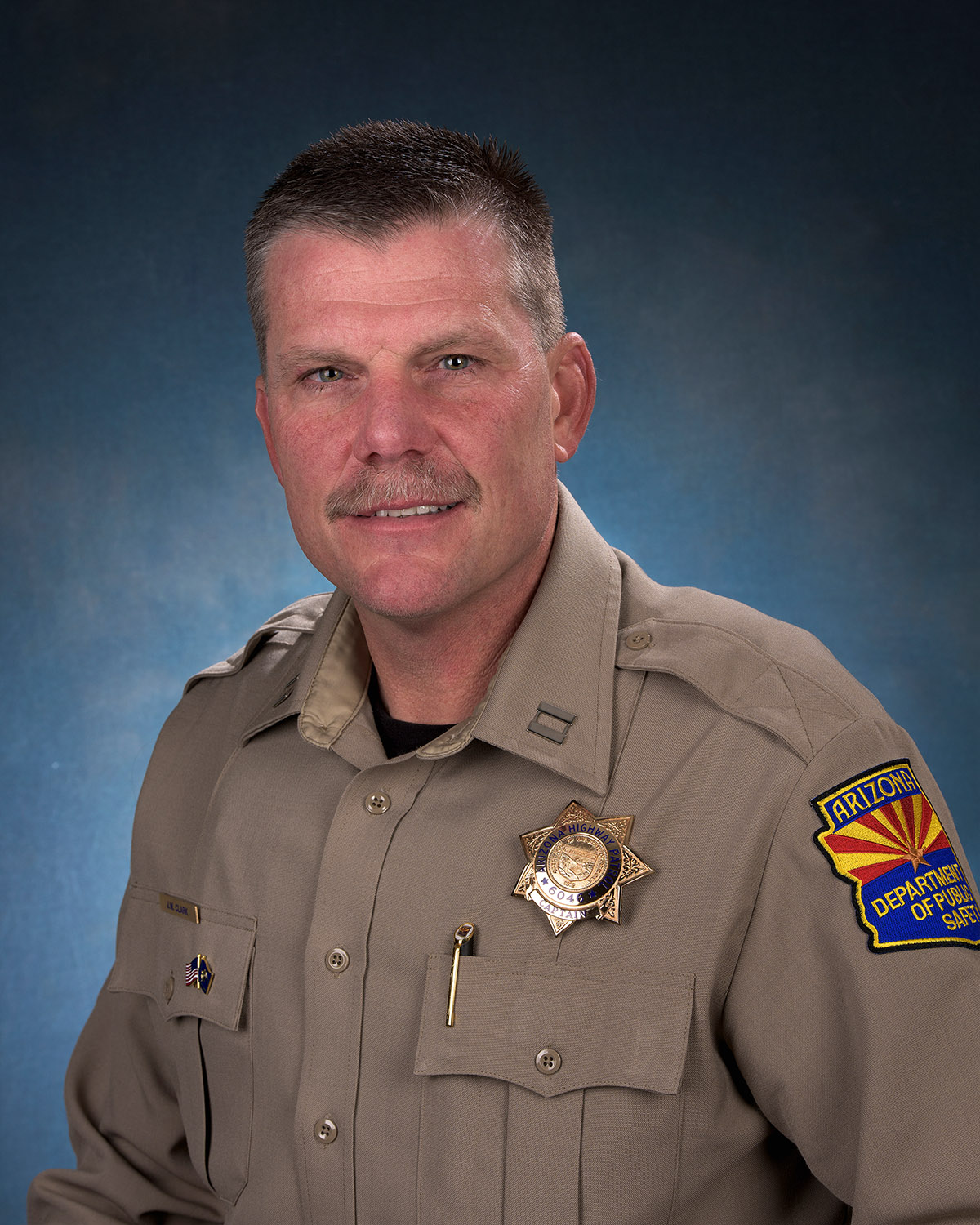 Captain Clark held numerous positions during his tenure in the Criminal Investigations Division. As a detective with the Mohave Area General Narcotics Enforcement Team (MAGNET), he conducted street-level to large-scale drug related investigations. He was ultimately promoted to sergeant and assigned to supervise drug-related and money laundering investigations in Yuma County.  During this assignment, he was deputized by the Drug Enforcement Administration (DEA), and worked with the DEA on numerous investigations.

In 2010, he was transferred to MAGNET, where he served as the supervisor and DEA liaison for six years. During his tenure in MAGNET, he created and taught a drug awareness program in the area high schools. He was a member of the Domestic Highway Enforcement Committee, the High Intensity Drug Trafficking Area (HIDTA), FBI-LEEDA and the Arizona Narcotics Officer Association.

Captain Clark has successfully completed the DEA Drug Unit Commander’s Academy, International Association of Chiefs of Police Leadership in Police Organizations Program, the FBI-LEEDA Command Leadership Institute and the DPS Leadership in Training Program, where he now serves as an instructor. 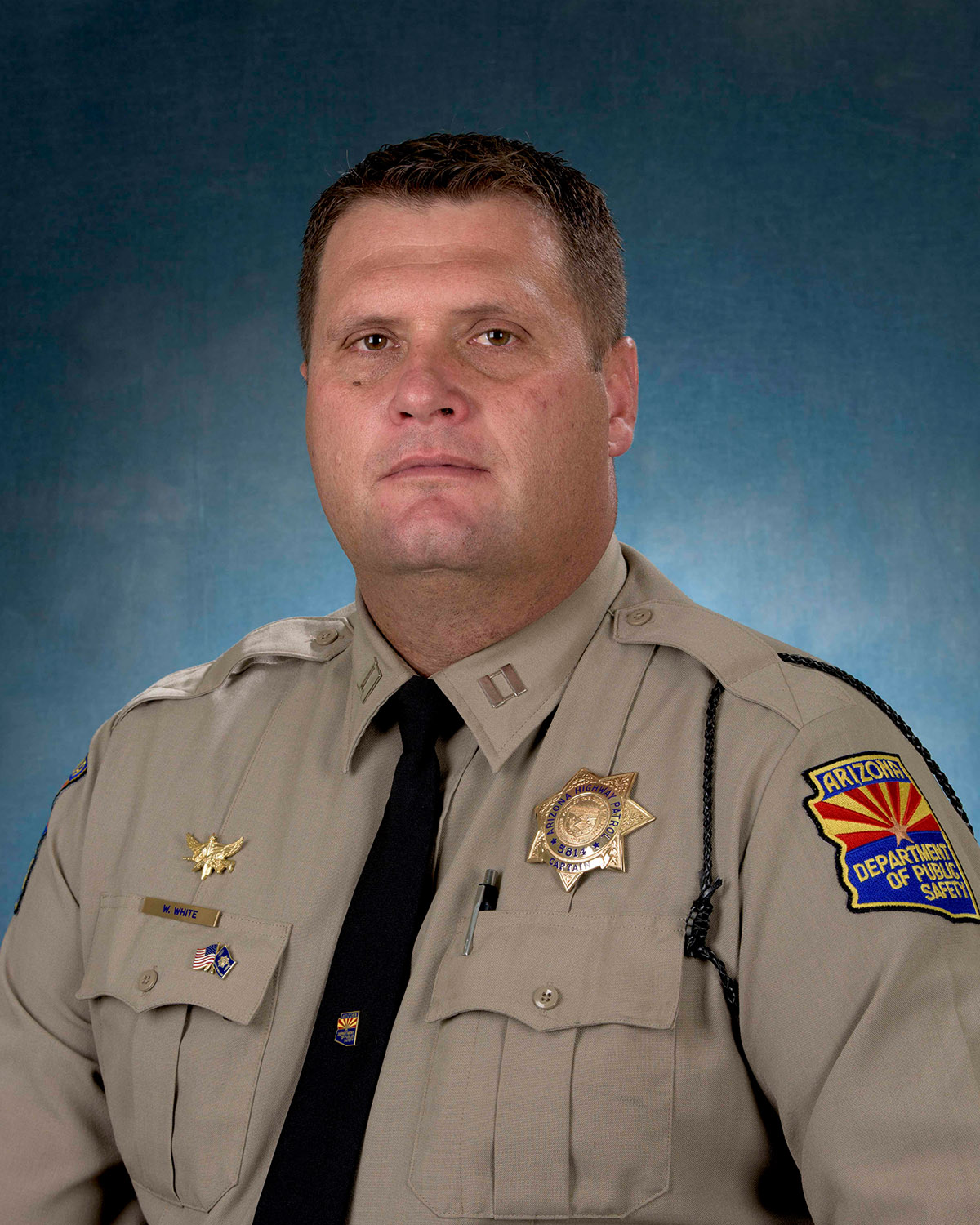 During his seventeen years as an Arizona State Trooper, he has held positions in the Highway Patrol Division and the Criminal Investigations Division. Prior to his promotion he served as an area supervisor in District 11 for three years and simultaneously as a SWAT Team Leader for over two years.  He has nine years of total SWAT experience along with 13 years as a Highway Patrol State Trooper where he performed various assignments in many areas to include DUI enforcement, Drug Recognition, Field training, Recruit training, Firearms training and Defensive Tactics training.

Captain White attended the Arizona Law Enforcement Academy. He has a Bachelor of Science Degree in Liberal Studies with an emphasis in Public Safety Administration from Charter Oak State College.

In September of 2015, Michael McLaren was promoted to the rank of Captain, assigned to be the District Four Commander. 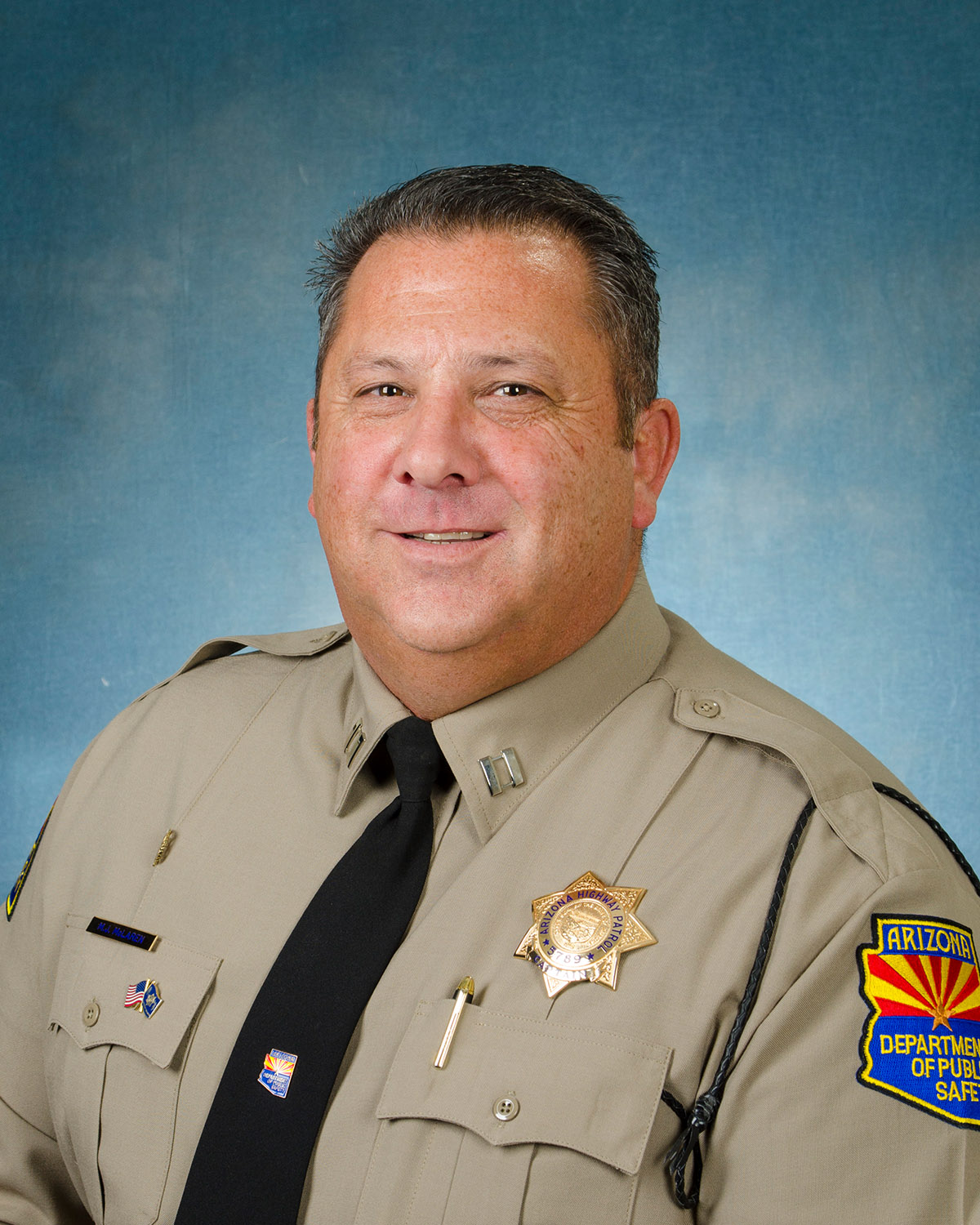 He has served the Department in numerous capacities by gaining skills and knowledge to teach other troopers.  He is a Drug Recognition Expert (DRE), a DRE Instructor, Collision Reconstructionist, HGN/SFST Instructor, Radar Instructor and was District Four’s Lead Firearm’s Instructor.

Captain McLaren attended the Arizona Law Enforcement Academy, the International Association of Chiefs of Police Leadership in Police Organizations Command program and is a graduate of the Northwestern University School of Police Staff and Command.  Captain McLaren has a Master’s Degree in Educational Leadership from Northern Arizona University.

In April of 2015, AZDPS Director Frank Milstead promoted Dean Chase from the Rank of Sergeant to Captain and assigned him as the District Nine, Highway Patrol Division Commander, located in Sierra Vista.  During his 17 years as an Arizona State Trooper, Captain Chase served in full-time, or temporary positions in the Highway Patrol Division, the Agency Support Division, and the Criminal Investigations Division. 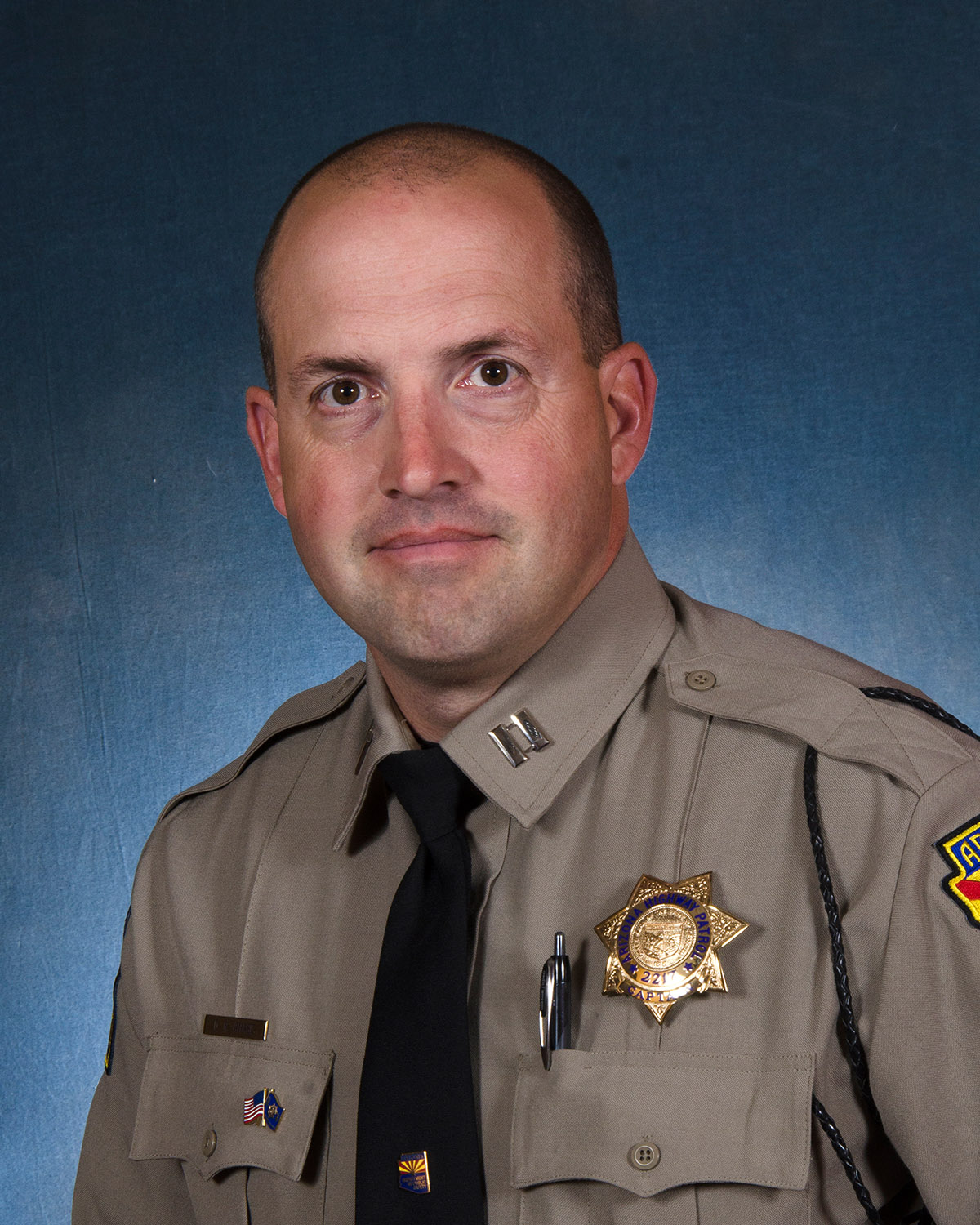 Captain Chase started his career with the department as a trooper in the remote duty station in Sanders. Captain Chase later transferred to the White Mountains and served in the Show Low Squad. During his time as a Trooper, he served as a Recruit Training Officer for ALEA Class #400 and he served a temporary assignment in the Navajo County Narcotics Task Force. He also served as a Drug Recognition Expert, and he also trained new troopers as a Field Training Instructor.

In 2007, he was promoted to the rank of Sergeant, and was assigned to supervise the Asset Forfeiture Unit. As a sergeant, he also held positions as a district administrative sergeant, and as a highway patrol road squad sergeant for the Holbrook, Sanders, and Heber squads.

Prior to being hired by AZDPS, Captain Chase served seven years with the Army National Guard in a field artillery unit before being honorable discharged in 1996. Captain Chase graduated from the Arizona Law Enforcement Academy Class #332. Captain Chase is also a graduate from the West Point Leadership in Police Organization (LPO) Command program, and the Rural Executive Management Institute Leadership program. 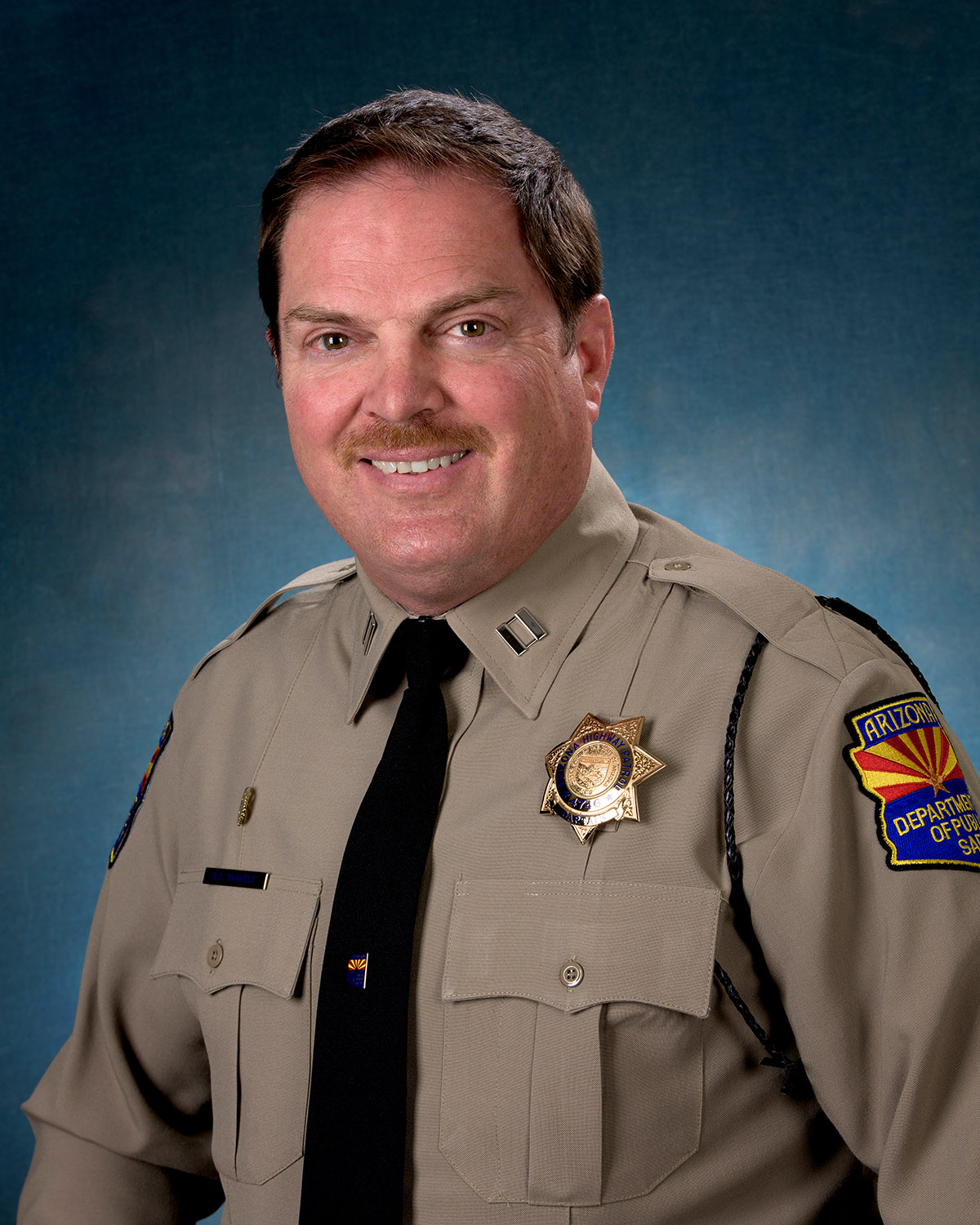 Captain Swavely served local agencies as a certified Drug Recognition Expert with over 130 drug evaluations, and provided testimony as an expert witness in Pinal County.  Captain Swavely presented drug recognition presentations to educate the faculties of Casa Grande Union High School and Cactus Middle School while partnering with the Casa Grande Alliance to promote a safe and drug free community.

Captain Swavely served as a volunteer baseball and softball coach and umpire for Casa Grande Little League. Captain Swavely received awards of recognition for his DUI enforcement from M.A.D.D. and the Casa Grande Elks Lodge. Captain Swavely arrested hundreds of criminal offenders along the I-10 corridor and surrounding state highways including the interdiction of one ton of marijuana during a commercial vehicle inspection. Captain Swavely interdicted illegally owned alligators and other reptiles during a traffic stop which was subsequently featured on the ABC Family television show Sea Rescue.