A two-milligram dose of fentanyl can be lethal
Wednesday, June 20, 2018
- For Immediate Release -

Pima County — On June 12, 2018, a detective assigned to the Arizona Border Strike Force (ABSF) stopped a vehicle westbound along I-10 in Pima County for a traffic violation. During the stop the trooper observed indicators of criminal activity which led to a search of the vehicle where approximately 2.1 lbs of fentanyl powder was located and seized.

The driver, and sole occupant of the vehicle, Jovanie R. Perez, 34, from Las Vegas, was arrested and booked into the Pima County Jail on the following charges:

Based on information gained from the traffic stop and a subsequent investigation, a search warrant was obtained by state detectives and served at a location in Scottsdale, AZ. Over 700 pills of fentanyl (approximately .5 lbs) were located and seized. Additional charges are pending in Maricopa County.

It is important to note that the total amount of fentanyl seized during this investigation had the potential to provide a lethal dose to half a million people.

The street value of the total amount of fentanyl seized is approximately $63,000.

Colonel Frank Milstead, AZDPS Director said, “Our Border Strike Force is dedicated to disrupting the flow of this extremely dangerous, deadly drug and keeping it off, not only the streets in Arizona but across the nation. We stand committed in our fight to combat this drug which is plaguing our nation and destroying families.”

The ultimate goal in the creation of the Arizona Border Strike Force is to deter, disrupt and dismantle transnational criminal organizations that breach the border in their quest to set up business in our state. Specific units within the Border Strike Force Bureau include the Canine District, the Southern Investigations District, and the Vehicle Theft District.

IMG_1053.JPG
The Arizona Department of Public Safety is a state-level law enforcement agency whose mission is to protect human life and property by enforcing state laws, deterring criminal activity and providing vital support to the State of Arizona and its citizens. 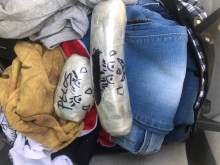 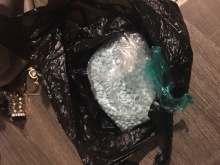