Arizona State Troopers have responded to over 830 calls for wrong way drivers this year
Thursday, June 30, 2016
- For Immediate Release -

In the last two weeks, two wrong way drivers have been intercepted by troopers resulting in injuries to both troopers involved in the separate incidents. Due to the swift and brave actions of these troopers, no other motorists were injured. Last August, Trooper Jeremy Barr made headlines when he bravely rammed a wrong way vehicle on I-17 near Black Canyon City. Trooper Barr is still recovering from injuries sustained during the crash.

DPS would like to remind motorists to avoid distractions while driving so that you can better respond, or take evasive action, if you encounter a hazard such as a wrong way driver. Have a plan mind to avoid a wrong-way vehicle so that if you encounter one, you will not waste a moment to take emergency evasive action that could save your life. 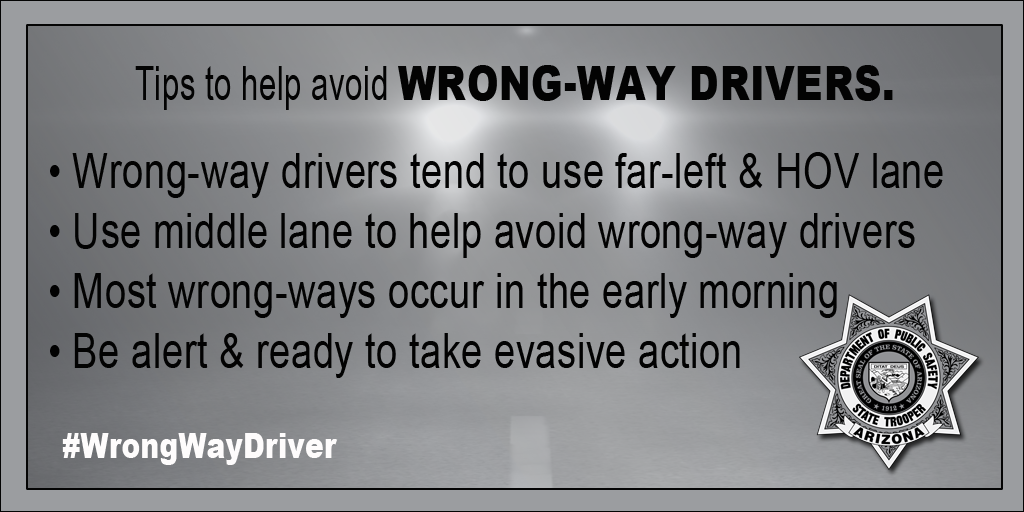 Below are DPS investigated wrong-way press releases from the past two years.

WW_Crash_Trooper06-23-16b.jpg
The Arizona Department of Public Safety is a state-level law enforcement agency whose mission is to protect human life and property by enforcing state laws, deterring criminal activity and providing vital support to the State of Arizona and its citizens.
###