On Friday, July 2, 2021, at approximately 1:20 p.m., the Arizona Department of Public Safety (AZDPS) received a report of a three-vehicle collision involving two passenger vehicles and a commercial tractor-trailer on eastbound Interstate 10 at milepost 82, near Tonopah.

Investigators determined the two passenger vehicles, a GMC Envoy and a Nissan Altima, were initially traveling westbound on I-10. Both vehicles drove into and through the dirt median, a marked “No U-Turn” zone, in order to turn around and travel eastbound on I-10. As the GMC and Nissan vehicles entered the eastbound travel lanes, they were struck by a commercial tractor-trailer.

As a result of the collision, both the GMC and Nissan sustained significant damage. The driver and four passengers in the GMC were transported to nearby hospitals with serious injuries.

The driver of the Nissan, identified as Natisha Nicole Moffett, 35, of Phoenix, and her five passengers all suffered fatal injuries and were declared deceased at the scene.

Upon her release from the hospital on Thursday, July 8, 2021, the driver of the GMC, identified as Iyona Holton, 35, was booked into the Maricopa County Jail on charges including:

This remains an active investigation. Updates will be provided when more information is available. 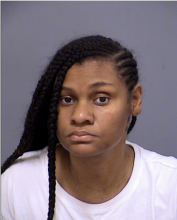 A tractor-trailer was traveling eastbound in the number two lane when, for an unknown reason, it rear-ended a Nissan Altima with six people on board. The force of the impact split the Nissan passenger vehicle in half. All six people inside the Nissan were pronounced deceased on the scene.

The tractor-trailer continued eastbound before striking an SUV containing five people, including a mother and her four children. All five occupants were taken to Valley-area hospitals with serious injuries.

The driver of the tractor-trailer was not injured.

The cause of the collision is still under investigation.