The Arizona Department of Public Safety (AZDPS) has been awarded over $1 million in grant funding from the Arizona Governor’s Office of Highway Safety (GOHS), including $510,000 for the Highway Patrol Division and $677,000 for the State Crime Laboratory.

The Highway Patrol Division will utilize the grant funding for special enforcement of marijuana-impaired driving, along with increasing the number of trained drug recognition experts (DREs) and phlebotomists. The funding will also enable the Highway Patrol Division to buy portable breath testing equipment, along with speed enforcement equipment such as lidar and radar.

Grant funding for the State Crime Lab will be used to streamline the analysis of samples for THC, the psychoactive component of marijuana, and reduce overall turnaround times for DUI lab testing. Since the passage of medical marijuana in Arizona, the State Crime Lab has seen a steady increase in the number of DUI cases containing THC. The grant funding will help the lab reevaluate and optimize its testing processes to accommodate the increased presence of THC in DUI cases.

“Following the passage of Prop 207, AZDPS is grateful to the Governor’s Office of Highway Safety for recognizing the need to award this grant funding,” said Col. Heston Silbert, Director of the Arizona Department of Public Safety. “The funding will help troopers enforce DUI laws in the state along with increasing the turnaround time for THC testing in those DUI cases, both of which will go a long way toward enhancing the safety of the public on highways throughout Arizona.” 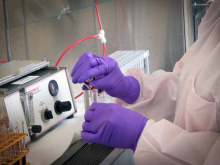