The female driver of the white Tahoe has been identified as 18-year-old Salina Avila of Phoenix. Avila was released from the hospital and booked into the Maricopa County Jail on the following charges:

- Aggravated assault with a deadly weapon

- Aggravated assault on a police officer

- Theft of means to permanently deprive

- Theft of means, knowing to be stolen

- Possession of a dangerous drug

There are no updates on the other suspect from this incident.

The trooper injured in this incident was treated and has been released from the hospital. He is at home recuperating. The female suspect remains in the hospital with non-life-threatening injuries. The search for the male suspect continues.

On Saturday, March 6, 2021, just after 3 a.m., a trooper northbound on Interstate 17 prior to Cactus observed a gray sedan traveling at over 100 miles per hour. The trooper attempted to stop the sedan as it exited northbound I-17 at Cactus. The driver of the sedan went through the traffic light at a high rate of speed, lost control, and spun out. The driver exited and fled. The trooper pursued. As the trooper was chasing the suspect on foot, the driver of a second vehicle – a white Chevrolet Tahoe – struck the trooper with the Tahoe. The suspect on foot jumped into the Tahoe. In fear for his life, the trooper fired his duty weapon at the driver of the Tahoe as it fled eastbound on Cactus. The trooper was transported to a local hospital for treatment of non-life-threatening injuries.

Officers with the Phoenix Police Department later located the Tahoe near 21st Avenue and Larkspur. One suspect was taken into custody and transported to a local hospital for serious injuries sustained from the trooper’s shots. She is identified as an adult female in her late teens. The driver of the sedan is still outstanding.

The northbound I-17 and Cactus off ramp as well as eastbound Cactus from I-17 will be closed for the investigation.

Updates will be provided here as they become available. 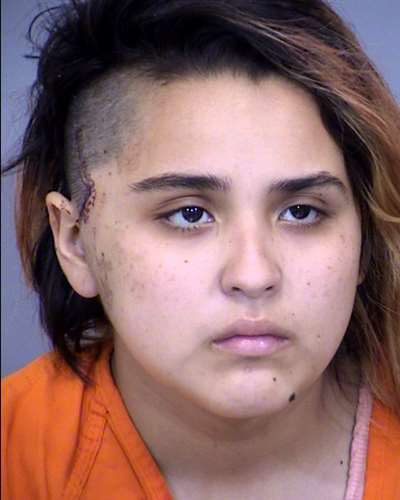