Medals are a universal sign of accomplishments. With the help of one woman, the Arizona Department of Public Safety is beginning to recognize them as a sign of protection and community support.

Liza Isable Viera grew up in a law enforcement family and after five law enforcement officers died in her home state of Texas, she wanted to show her support to officers there and around the world and offer them a special form of protection. 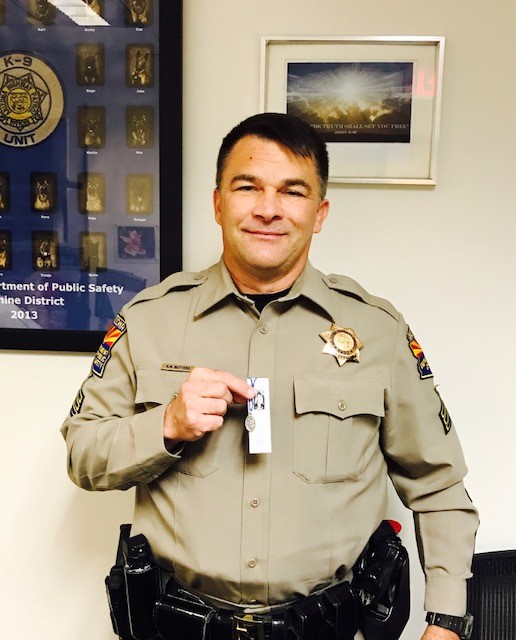 DPS is always humbled and grateful for the continued support it receives from the community it protects and this medal is a special symbol and reminder of that. The support they receive never goes unnoticed, “she deserved, at a minimum, a thank you on behalf of our agency and I offered to distribute some of her medals to troopers at the DPS in support of her mission,” said Sergeant T.M. O’Brien of DPS.

St. Michael the Archangel is recognized in the Catholic religion as being a “protector”. Viera, 20, said, “I have to do something to show law enforcement that I had their back and that I was praying for them.” She then went to her local Catholic bookstore and purchased St. Michael medals, had them blessed and then provided them to the officers in her community.

But she didn’t stop there; “Back the Blue – Liza’s Mission” has spread from her community to the state of Texas, then to the 14 states, including Arizona, and her packages, containing medals and handwritten notes, have even made it to Canada, Belgium and the United Kingdom.

She had distributed nearly 19,000 packages and troopers here at DPS have been fortunate enough to be the recipients of 60 packages, including Sgt. Ronald Butters (pictured right). Sgt. O’Brien has taken it upon himself to distribute to troopers and personally thank Viera for her support of DPS.

Viera recognized that although not all the recipients of the medals were practicing Catholics, they believed in the symbolism she was portraying through the medal, “even if they aren’t Catholic, [the medal] symbolizes that people in the community also had the law enforcement officers’ backs and we’re praying for them.”