Troopers brighten the day of teenager recovering from major surgery

On Tuesday, March 7, 2017, DPS Troopers James Casey and Robert Poole were able to brighten the day of a 14-year-old boy from Texas who was recovering from major surgery at the Phoenix Children’s Hospital in Phoenix. The Troopers were able to meet with the boy, whose name is Austin, and his family at the Ronald McDonald house near the hospital. During the mid-day visit, the Troopers provided Austin with a DPS Trooper shirt, a DPS challenge coin, a DPS shoulder patch, and a DPS flat badge. The Troopers also provided Austin with a replica DPS patrol car with their autographs on it.

In addition, the Troopers shared some exciting law enforcement stories with the family and provided them with an up-close look at Trooper Casey’s ghost-style patrol vehicle and all of its various features. For Austin, who suffers from a major medical condition called Pectus, it was much more than just a special moment when he met the Troopers. After all, to him, Troopers Casey and Poole are the equivalent of major Hollywood celebrities. The Troopers are regularly featured on the new and popular television show Live PD which is broadcast by the A&E network. 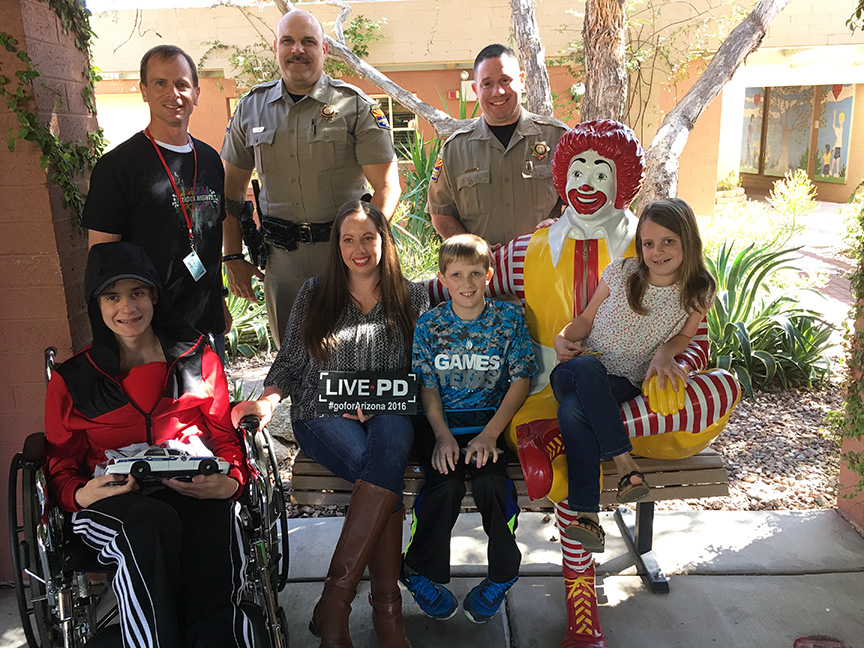 Austin is an enormous fan of the show, and he became more and more fond of Troopers Casey and Poole every time he saw them in action on the television screen. Austin’s mom, dad and two siblings, Haley and Nathan, also came to admire the DPS Troopers on the television show, and found Trooper Casey’s story particularly inspiring. Casey was severely injured when he was shot in the face during a traffic stop, but has since made an incredible recovery and returned to full patrol duty as a Trooper. The family found parallels between Casey’s amazing battle and recovery and the health battle their son is facing.

“When Troopers Casey and Poole first walked up to Austin and his family, you could tell it was a very special moment for the family by the huge smiles on their faces,” said DPS Trooper Kameron Lee.

Trooper Lee and DPS Public Information Officer Raul Garcia were also in attendance during the special moment. Both helped coordinate the meeting between the “celebrity” Troopers and the family. The meeting came about after the family sent an e-mail to DPS on Sunday, March 5 saying they were in Phoenix and that their son, who was having major surgery, would love to meet Troopers Casey and Poole.

“Shortly after DPS received this e-mail, things were set in motion to make this meeting happen.  It was an idea embraced by the Director’s Office and the entire Department, and it was viewed as an honor for the agency to have received such a request,” said Trooper Lee.

The meeting, which was also attended by a representative from the A&E television network, also proved very special for Troopers Casey and Poole.

“These two Troopers were made to feel like true celebrities during this meeting, and they were also made to feel very special and valued by this wonderful family,” said Trooper Lee.

The inspirational meeting with the Troopers was much needed for Austin as he was recovering from an invasive surgery that took place about a week earlier in order to place two rods on the inside of his chest cavity. The procedure was necessary to relieve pressure on his lungs and heart caused by a condition he was born with. His prognosis for recovery is very good, and it was anticipated that his doctors in Phoenix would grant him clearance to return home to Texas by March 10.

If Austin’s recovery ever proves challenging when he is back home, he can always reflect back on the inspirational meeting he had with his two “celebrity” superheroes, Troopers Casey and Poole. He can also draw inspiration every time he sees his heroes on television knowing that he met them in person, and that he brightened their lives as well.