What a difference six years makes!

In January of 2014, the State Crime Laboratory’s backlog of DNA cases was 5,335, with some cases taking more than a year to be analyzed.

The backlog was a big concern for the laboratory, so an effort was launched to improve workflow efficiency in the lab, in addition to the quality of evidence submissions sent to the lab.

The streamlining process began with laboratory staff evaluating the internal DNA analytical system as they implemented numerous changes to operate more effectively.  Secondly, police officers around the state were provided better training about which types of evidence are most amenable to DNA analysis, and how the evidence should be submitted for efficient processing.

These two major overhauls went a long way toward reducing the backlog of DNA cases. Every month, the laboratory receives 300 new DNA cases, but the current backlog sits at only approximately 700 cases. This is the lowest it has been since DNA analysis began in the early 1990’s.

With major scientific strides made in DNA testing, the crime lab has demonstrated its leadership in the forensic community by implementing DNA enhanced services, including statewide Rapid DNA analysis and Familial DNA analysis. These services have already proven effective in providing investigative leads for law enforcement, ultimately leading investigators to their suspects.

“The Laboratory has done an outstanding job of improving DNA services to our law enforcement partner agencies. Timely analysis of forensic evidence is critical for the rapid identification of criminals and the prevention of additional crimes,” said Colonel Frank Milstead, Director of the Arizona Department of Public Safety.

With Arizona’s growing population, the State Crime Lab stands ready to meet increasing demand with an efficient DNA analysis process that ensures police agencies are able to get the crucial evidence they need in a timely manner.

For information on other lab time improvements, follow this link: https://www.azdps.gov/news/releases/816 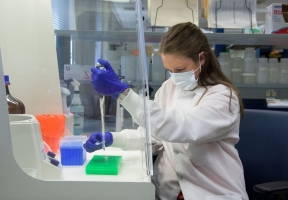