1971 Down the Highways: "This issue is dedicated to Patrolmen Jim Keeton and Don Beckstead" | Arizona Department of Public Safety
Skip to main content

1971 Down the Highways: "This issue is dedicated to Patrolmen Jim Keeton and Don Beckstead" 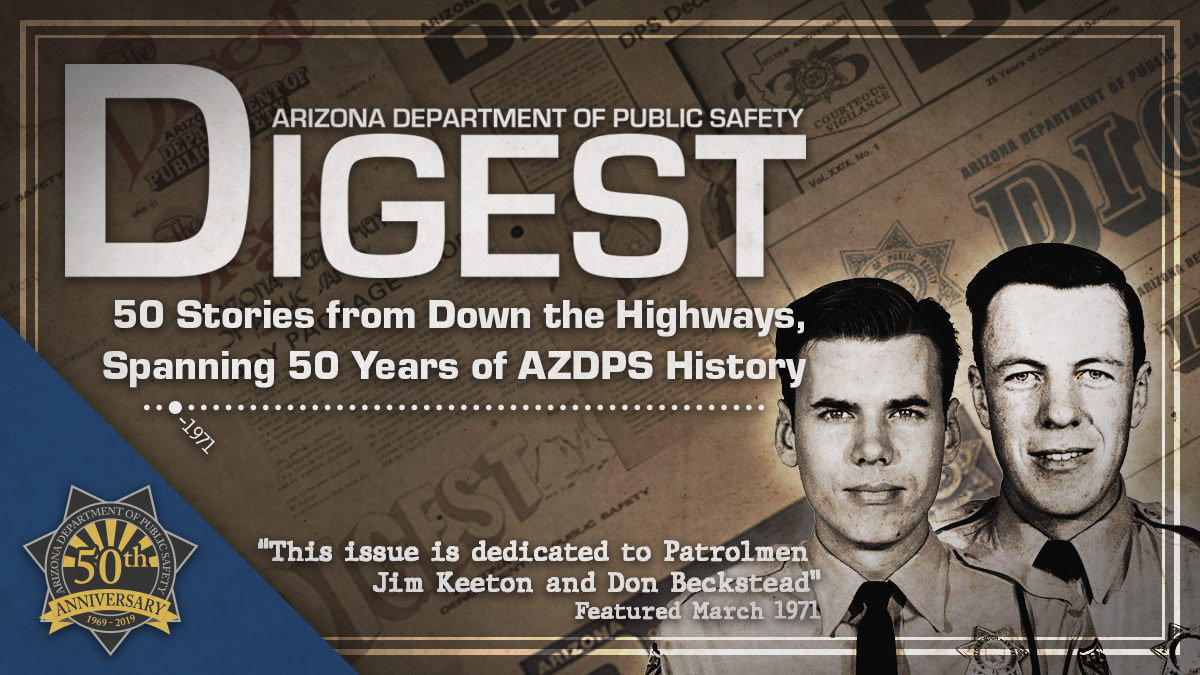 Now, in 2019, we celebrate 50 years of the Department and take a look back at notable accomplishments, unfortunate tragedies and feel good stories from the years, or as we like to say, from Down the Highways. Sit back and take the road trip through history with us; once a week we will post a feature story, exactly as it appeared within the respective Digest publication, from the last 50 years, starting in 1969 all the way up to 2019.

1971: In this week’s entry we look back on a day that took two lives from the Department. Officers Beckstead and Keeton performed two separate traffic stops on the same suspect when they were fatally shot on February 5, 1971. The below story was featured on the front page of March 1971 issue of The Digest.

"This issue is dedicated to Patrolmen Jim Keeton and Don Beckstead

Life is our most cherished possession. Jim and Don gave theirs trying to make this a safer place in which to live.

James Lee Keeton and Don Alan Beckstead both graduated from the Highway Patrol Academy in November 1969. Jim was born in Prescott and had been stationed in Holbrook and Navajo. Jim's father, Horner C. Keeton, is a retired Sergeant from the Highway Patrol. Don was born in Phoenix and came to the Patrol from the Phoenix Police Department. Don had been stationed in the Willcox area before moving to Houck.

Both Patrolmen were killed by Bertram Greenberg, a psychopath, on parole from California and wanted as a suspect in a rape, murder of a 13-year old girl in that state. Both of our patrolmen, apparently, stopped Greenberg as a traffic violator.

Exposure to danger becomes part of a police­man's life when he takes the oath as a policeman. We should be constantly aware of this fact and take the necessary precautions to lessen this danger. We are at a disadvantage, but if we utilize all of our training, we can better our odds.”

Check back every week to see where we make our next stop in history from Down the Highways! Next week’s stop: 1972!