1969 Down the Highways: "Paul Died a Hero!" | Arizona Department of Public Safety
Skip to main content 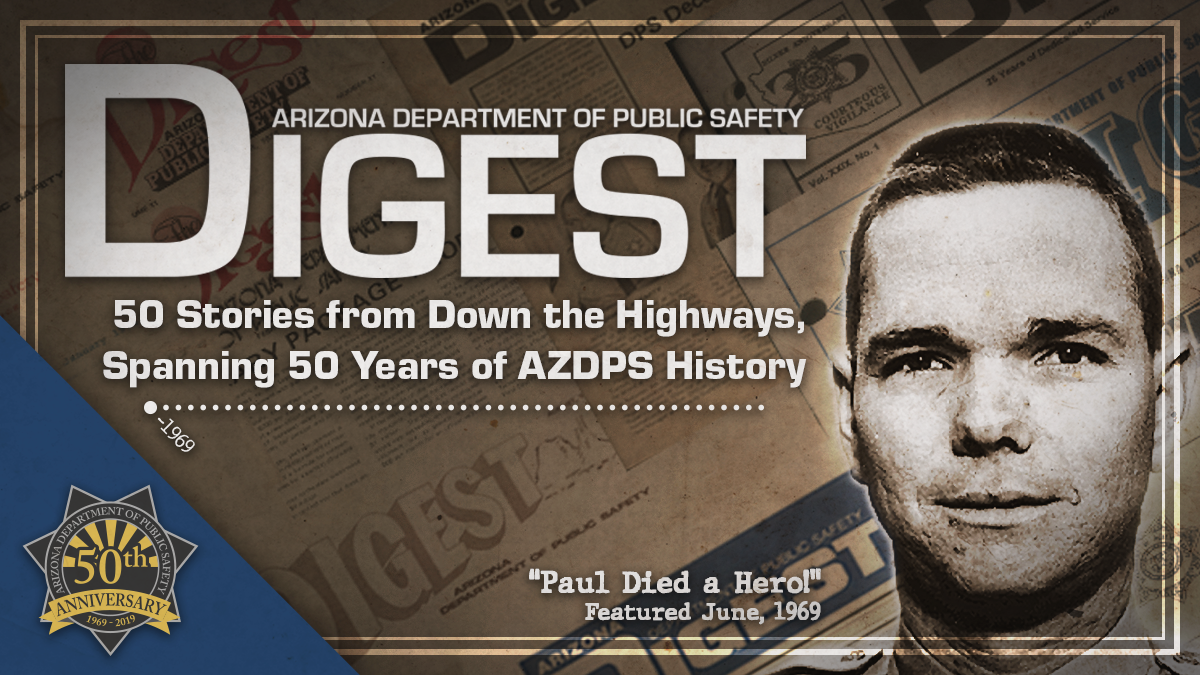 Now, in 2019, we celebrate 50 years of the Department and take a look back at notable accomplishments, unfortunate tragedies and feel good stories from the years, or as we like to say, from Down the Highways. Sit back and take the road trip through history with us; once a week we will post a feature story, exactly as it appeared within the respective Digest publication, from the last 50 years, starting in 1969 all the way up to 2019.

1969: In this week’s entry we look back at the tragic death of Highway Patrolman Paul Edward Marston, who died on June 9, 1969. The below story was featured on the front page of the Vol. V, No. 5, June-July 1969 issue of The Digest.

Highway Patrolman Paul Edward Marston is dead. Paul died a Hero in the line of duty! Paul was killed... June 9, 1969 by an escaped convict in Chino Valley, Arizona.

Paul died in the line of duty protecting you and me ... making Arizona and the United States a pleasant, habitable place rather than a jungle of lawlessness where no man or his family would know the happiness of safety.

Paul chose his career as an officer of the law as his record indicates ... he realized his responsibilities to his Country and to each of us ... even as he realized the perils of his profession.

With each succeeding year the job of officers of the law becomes more difficult ... recent court rulings have not made their jobs any easier ... Yet, each day they report for duty they lay their lives on the line, just as Paul did yesterday!

There is no more honorable profession than a dedicated Law Enforcement Officer!

... but, as I have said before, they are the lowest paid considering their duties, and receive less recognition than any other profession. You and I talk about law enforcement, crime in the streets, yet we allow our city, state and nation to appropriate money for many less worthwhile projects while the real protectors of our lives and homes remain underpaid! Their staff's undermanned, and many, many times the officers themselves held up to ridicule!

If Paul's death can help you and me, our City, County, State and Nation to stop and consider these things carefully and soberly then Paul will not have died in vain. Our deepest sympathy to Rosalind, Paul's wife, Sherry, his 5-year-old daughter and Brian, his 3-year-old son. (Re-print Prescott Courier)”

Check back every week to see where we make our next stop in history from Down the Highways! Next week’s stop: 1970!