This week our District Spotlight is on District 4, headquartered in Yuma, AZ!

District 4 encompasses the southwestern portion of Arizona. Bordering our Metro West district, it runs from Gila Bend, about one hour southwest of Phoenix, all the way down through Ajo and Organ Pipe National Monument to the international border with Mexico. From Yuma and Somerton in the southwestern corner of the state, it stretches up to Parker, near the Colorado River.

Troopers in this area patrol approximately 575 miles of roadway in four counties – Yuma, La Paz, Pima and Maricopa. With many visitors traveling through as they head back and forth from California or Mexico, major travel corridors include Interstate 10, Interstate 8, State Route 95 and State Route 85.

The first trooper was assigned to Yuma 89 years ago, on July 1, 1931. At that time, the agency was known as the Arizona Highway Patrol (AHP) and was a branch of the Arizona Highway Department. The initial AHP force was comprised of just 14 patrolmen – one in each county – and a desk sergeant.

Today, District 4 is headquartered out of the district office on Gila Ridge Road in Yuma. Captain Michael McLaren is the district commander, with over 20 years of service. Captain McLaren has spent his entire career in District 4.

Outside the office, visitors will find a memorial honoring four state troopers who died in the line of duty.

If you live in or are visiting southwestern Arizona and have a question for District 4 troopers, please call the office non-emergency number at (928) 782-1679. 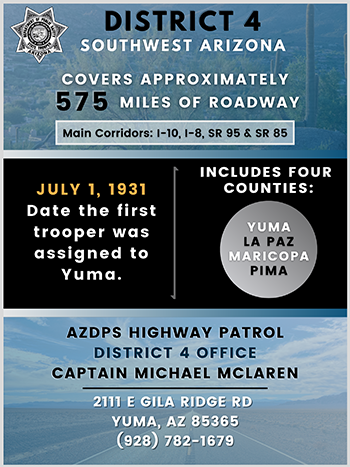 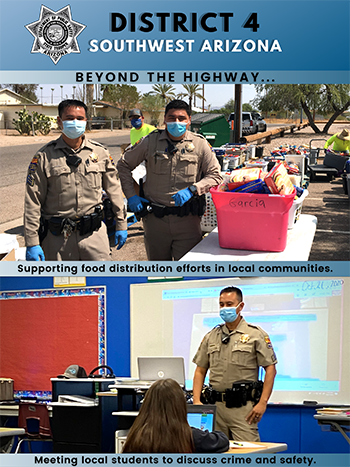 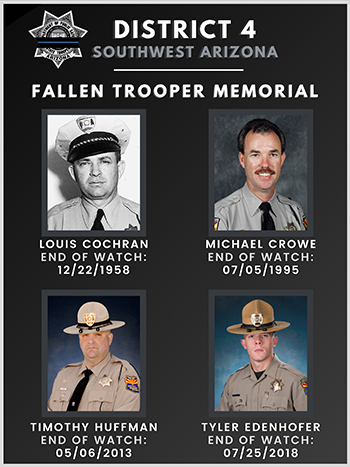 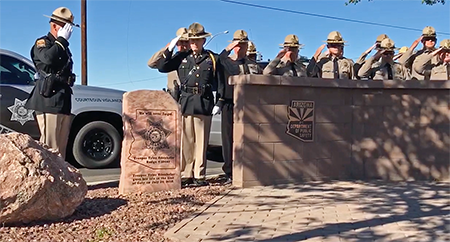