A trooper’s dedication to public safety never stops, even when they’re off the clock!

On Monday, April 20, 2020, Trooper Matthew Bryan was off duty and at home in Mesa when he heard pounding on his front door. Trooper Bryan opened the door and found two of his neighbors in distress. Their three-month-old baby was choking on an unknown object, and knowing Trooper Bryan was a state trooper, they'd quickly brought the baby to him for help.

Seeing the baby was starting to turn blue in the face, Trooper Bryan took immediate action and performed back blows, as he was trained to do in academy. He was able to successfully dislodge the object and cleared the baby’s airway. Paramedics from the Mesa Fire Department arrived soon after and treated the infant at the scene.

“The Department of Public Safety is extremely proud of Trooper Bryan’s swift and skilled actions in this incident,” said Lt. Colonel Jenna Mitchell, Assistant Director of the Highway Patrol Division.  “He undoubtedly prevented a tragedy, bringing this dramatic event to a happy ending for all involved.” 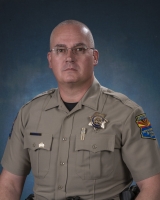