On Wednesday, April 8, 2020, at approximately 10:10 p.m., AZDPS troopers observed several vehicles set up to start racing near Interstate 17 and McDowell Road. The same group had staged to race at another location in Phoenix, but were broken up by Phoenix Firebird, the Phoenix Police Department’s helicopter.

A trooper was able to stop three of the vehicles, but the fourth vehicle fled another trooper by running a red light on Camelback Road and heading northbound on I-17. Phoenix Firebird was able to follow the vehicle and observed the driver and passenger bail out at 22nd Drive and Georgia. A short time later, with the assistance of Firebird, both the driver and passenger were taken into custody.

The driver, 29-year-old Isaac Garcia, had been arrested by troopers two weeks prior for felony flight and possession of marijuana. Both Garcia and his passenger were booked into jail on several felony charges.

Charges against Garcia include:

Recently, AZDPS received an increase in grant funding from the Governor's Office of Highway Safety (GOHS) to help troopers combat street racing on Valley freeways. Learn more about the at www.azdps.gov/news/digest/88. 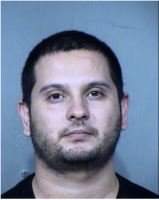