In recognition of Women’s History Month, we are proud to highlight Arizona Department of Public Safety (AZDPS) Lieutenant Colonel Jenna Mitchell, Assistant Director of the Highway Patrol Division (HPD). She is the second woman in AZDPS history to hold the rank of lieutenant colonel. Throughout her career, Lt. Colonel Mitchell has held civilian, trooper, supervisory and executive staff assignments throughout the Department.

Lt. Colonel Mitchell has served the State of Arizona for almost 29 years, beginning her career as a trooper trainee in July of 1993 and graduating from the Phoenix Regional Police Academy as an Arizona State Trooper in May of 1995.

Lt. Colonel Mitchell began her sworn career with AZDPS as a trooper in Casa Grande, where she promoted to the rank of sergeant in 2001. In March of 2006, she was promoted to captain and held command assignments in Management Services Bureau, Highway Patrol Metro East District, Southern Gang Enforcement District, and the Canine District. She was promoted to the rank of major in May of 2015 and served as chief of staff over the Criminal Investigations Division and Agency Support Division.

In July of 2019, she was promoted to the rank of lieutenant colonel and appointed Assistant Director of Highway Patrol Division. This division provides law enforcement services throughout the state, assuring the safety and efficiency of the highway transportation system, in addition to providing support to local and county law enforcement agencies.

“I am honored to serve the as the lieutenant colonel of the Highway Patrol Division,” said Lt. Col. Mitchell. “I believe that hard work, determination, and great mentors have been key to my success.  I am grateful to the women of the Arizona Department of Public Safety that came before me and paved the way, and I am committed to mentoring the next generation of law enforcement professionals. I hope that my accomplishments inspire others, especially young girls, to pursue their dreams.” 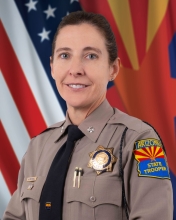